During the first half of 2014, Ascension Parish has experienced rainfall amounts greatly exceeding what is considered average for that time frame. These high rainfall amounts placed severe strain on the existing gravity drainage ditch conveyance system within the Parish and exposed major deficiencies in the drainage system. During the high rainfall events, it was observed that “bottlenecks” within the drainage ditches were hindering flow and causing floodwater backups to occur. These bottlenecks were determined to be directly related to the insufficient ditch cross-sectional area.

To reduce the risk of drainage ditch bottlenecking and backups, Ascension Parish Government sought to implement a program to determine the theoretical cross-section required in the Parish’s major drainage ditches to convey a 25-year rainfall event, without excessive flow velocity and channel backup. To gain an understanding of the cost and feasibility of such a program, the Parish engaged GreenPoint to perform the modeling, channel sizing analysis and related work on a single ditch within the Parish known as Clouatre Ditch. With the results of this initial “pilot” project, the Parish sought to be in a better position to plan and fund future efforts to perform similar work on the remaining major ditches in the Parish.

GreenPoint incorporated existing hydrologic and hydraulic modeling data to determine the required flow within the ditch for the 25-year rainfall event, as well as publicly available LiDAR data and aerial photography to establish a three-dimensional terrain model of the drainage ditch corridor in Autodesk AutoCAD Civil 3D.

The results of the effort were captured in a technical memorandum describing the analysis methodology, the design and configuration of the new ditch cross sections and estimated cut and fill quantities. GreenPoint also incorporated the input of the Parish’s wetland permitting consultant to determine the pilot’s anticipated regulatory impacts. 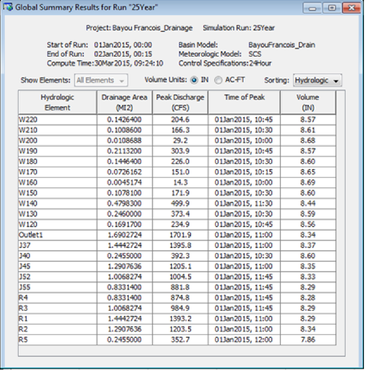 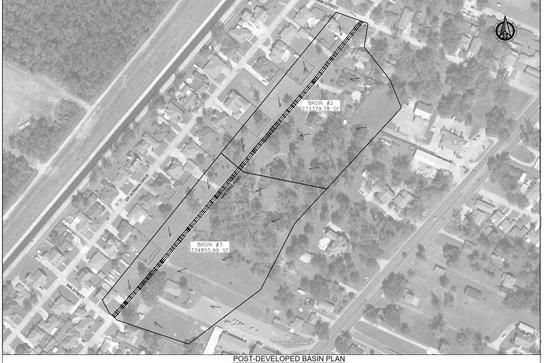 During the spring of 2014, parts of Ascension Parish experienced unprecedented rainfall that resulted in severe flooding, straining the Parish's gravity drainage conveyance system and exposing major deficiencies in the system.  The Parish appointed GreenPoint to model and develop the measures required to expand the system's capacity to convey the 25-year storm event.  GreenPoint is piloting the approach on Clouatre Ditch, and based on the findings will recommend the approach required to expand the effort to the remainder of the Parish's gravity drainage network.

GreenPoint performed the drainage analysis and engineering design for the extension and improvements to Oak Tree Road, a residential street in Belle Chasse.  To establish the broader area’s drainage needs, GreenPoint first performed a detailed hydraulic and hydrologic evaluation of the area, and modeled the connection of the new stormwater collection with the area’s existing drainage infrastructure.  The design of the improvements included the integration of a new wastewater collection system, a new water distribution system and a new stormwater collection system with existing infrastructure, and relocation of an existing 14-inch wastewater force main.